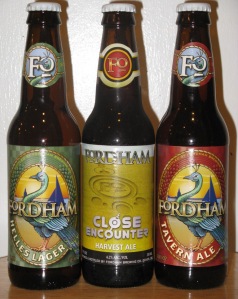 After leaving Chevy Chase Wine and Spirits with my four packs of Dogfish Head, I drove a block to Magruder’s for my second in-store beer tasting of the day.  A representative from Fordham Brewing Company was pouring samples and I tried them all:

I needed some session beer for the weekend (September 25) so I bought a mixed case of Fordham on sale for $22.99.  You can’t beat the price!  I got two six packs of Close Encounter and a six pack each of the Helles Lager and Tavern Ale.

I’ve always liked Fordham Brewing Company, which used to be a Maryland microbrewer.  The brewery originated in Annapolis at the Rams Head Tavern, which I’ve visited whenever I’ve been in Annapolis.  We’ve also been to the Rams Head for Fordham beer in Baltimore a couple of times, after visits to the Port Discovery Children’s Museum.

But in 2007, Fordham was bought by Anheuser-Busch.  A-B also purchased Old Dominion Brewing Company around the same time.  They consolidated the operations of both breweries under the name Coastal Brewing Company and moved to Dover, Delaware.  Read the press release on the A-B web site to learn more.  The beer is probably the same, but it just doesn’t seem as local as it used to be.