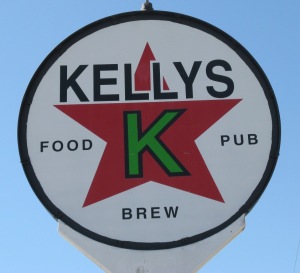 I traveled to Albuquerque, New Mexico last week with my co-worker Todd, a fellow craft beer enthusiast.  We had a direct flight on Southwest out of BWI and landed around lunch time on Sunday, September 27.  After getting our rental car, we drove to Kelly’s Brewpub to eat lunch, watch the football games, and try the beer.

Kelly’s is right on historic Route 66 across the street from the University of New Mexico campus.  It’s located in what was a Ford dealership and service station built in 1939.  We bypassed the large patio seating area and headed inside to watch the Ravens and Redskins games.

There were 19 house beers listed, but they didn’t offer a sampler.  Instead, I ordered half-pints so I could sample a few different beers.  I tried the:

Kelly’s Brewpub is definitely worth a stop if you’re in Albuquerque.  Todd and I left Kelly’s well-fueled for our next stop: a hike in Petroglyph National Monument.  We saw all kinds of petroglyphs left by Native Americans and settlers hundreds of years ago and enjoyed the New Mexico sunshine on a two mile hike around Rinconada Canyon. 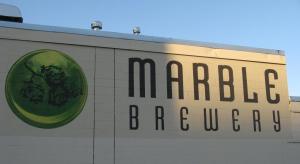 After checking into the Hotel Albuquerque near historic Old Town Plaza, I quenched my thirst at Marble Brewery, just a mile from the hotel.  Marble is a low-key laid-back taproom with absolutely awesome beers.  I knew I found a great spot when customers kept coming in to get their growlers filled, and they usually brought in empty growlers that came from a different brewery.

Marble Brewery had eight house beers on tap and they offered 5 oz. samples for $1.50, so I ordered the complete sampler:

My favorite was the Marble Red, a hoppy red IPA.  From the Wood was a strong dark tripel that was almost scary.  The Albuquerque Sour was another unique beer on the menu – I really like sour beers, which are tart and delicious despite the name.  This place is also worth a visit, but don’t go for the food (there’s no kitchen).

Dinner the next night (September 28) was at the High Finance Restaurant and Tavern, via tram atop Sandia Peak.  As it says on their web site, “No other restaurant offers such a unique mode of transportation to get to a dining destination. The 2.7 mile tram ride takes you through several climate zones on your way to the restaurant. Dining at 10,378′  in elevation with views of over 11,000 square miles is worth the trip in itself.”  It gets even better – they had Marble Red on draft on top of the mountain!

After a half-day meeting on Tuesday, September 29, Todd and I had some time to kill before our flight home.  With some difficulty, we found Chama River Brewing Company.  It was a great spot for lunch – great food and great beer.  There were ten house beers on tap and I ordered an eight beer sampler (I skipped the light ale and lager produced for the masses).  The brewer loved using hops in his beer – among the eight were four hoppy selections:

The best beer by far, maybe the best of the entire trip, was The March Hare.  According to the brewer, “the intent is to give all of you a taste of what can be done with the IPA style if we throw caution to the wind and just use an obscene amount of hops.”  This was a strong IPA at 7.5% ABV.  What We’ve Learned Pale Ale, hopped with seven different hops, was another stand-out.