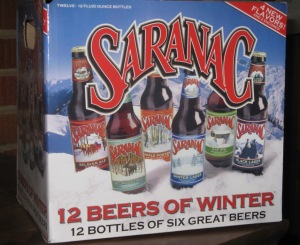 The Saranac 12 Beers of Winter mix pack is one of my favorite holiday traditions, dating back to at least 2001 (according to my beer database, which I started in 2001).  The line-up of beers changes every year and the 2009 line-up included four new beers and two encores:

The Matt Brewing Company in Utica, New York brews the Saranac line of beers.  I was glad to find the 12 Beers of Winter at Chevy Chase Wine and Spirits in Washington, D.C. the weekend of December 19.

One response to “Saranac 12 Beers of Winter”