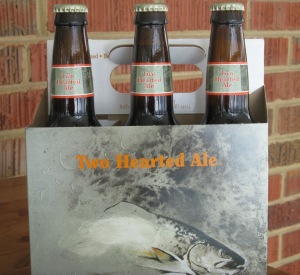 Who knew? Who knew they made such great beer in Michigan? I’ve never been to Michigan, but it’s high on my list of must-visit beer destinations.  Bell’s Brewery (Kalamazoo, MI) is a big reason why.

Bell’s Two Hearted Ale is solidly in my top ten list of favorite beers. It’s a beautiful hoppy IPA with strong notes of grapefruit. And you won’t feel short-changed by the 7.0% ABV. During the snowstorm, I tried Two Hearted Ale side by side with Tupper’s Hop Pocket Ale, and the Two Hearted Ale easily won that taste-off.

I haven’t had a Bell’s beer that I didn’t really enjoy, and I’m looking forward to the release of Oberon in the spring.

Driving around (and parking) with three feet of snow on the ground is a big hassle, so my beer shopping was again limited to the Kensington Pizza & Kabob House. For President’s Day Weekend, I picked up six packs of:

We braved the snow (and driving and parking nightmares) to go out to eat at Copper Canyon in downtown Silver Spring, MD, where I had two pints from the local Hook & Ladder Brewing Company:

After dinner, we stopped for a pint at McGinty’s Public House, where I had a Sam Adams Noble Pils, thew new Sam spring seasonal. Bring back Sam Adams White Ale!