As I described in an earlier post, the bottled beers from South Africa were not remarkable.  But I found some excellent draft houses, including the Paulaner Bräuhaus Cape Town. 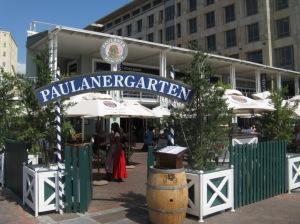 I walked down to the Victoria & Alfred Waterfront on Tuesday, March 9 to grab some lunch. It was a beautiful sunny day and I couldn’t pass on an outdoor lunch in a German biergarten at the Paulaner Bräuhaus. I started my lunch with a freshly baked pretzel served with farm butter and pork lard (Frisch gebackene Brezel mit Landbutter und Griebenschmalz), and then moved on to a Gypsy ham and pommery mustard toasted sandwich (Zigeunerschinken mit Senf).

As I savored the food, I enjoyed a flight of the three house beers:

There were also two seasonal brews that I sampled: 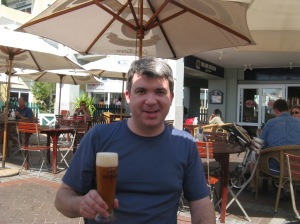 The Red Weiss may have been the best beer of the entire trip!  It was a cloudy hefeweizen with a distinctive red tint. The mouthfeel was like pure velvet. It was a delicious tasting wheat beer with a twist – the red color was achieved from an interesting blend of malts.

I was surprised to find a German biergarten in Cape Town, and it was a little strange to see the locals dressed in a traditional German dirndl. But I really enjoyed the German food and beer, and the warm and inviting vibe. I went back to the biergarten one evening later during my trip to enjoy some live music and more Red Weiss.