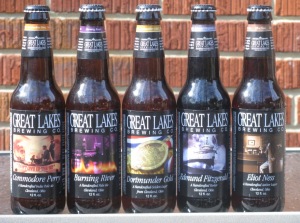 I was in the mood for something new and different when I stopped at the beer store to stock up for the weekend. I found what I was looking for in some Ohio brew from Great Lakes Brewing Company.

This Cleveland, Ohio brewery is new to the DC market and I picked up a case and a six-pack at Magruder’s so I could try all five styles. I sampled the:

All five beers were above average and exceedingly sessionable — I’d recommend the beers from Great Lakes to anyone. In addition to the six packs, they offer a 12-pack sampler that I’m sure I’ll pick-up on a future visit to Magruder’s. I’d love to visit the brew pub in Cleveland and sample some of the seasonal selections and pub exclusives like Holy Moses White Ale and Rye of the Tiger.

Thanks to the Great Lakes Brewing Company web site for the details behind the interesting names of the beers.

Updated May 16: I bought a six pack of Holy Moses White Ale at Magruder’s. A Belgian Wit spiced with orange peel, chamomile and coriander, Holy Moses is named after Moses Cleaveland, a Connecticut native who founded Cleveland in 1796.