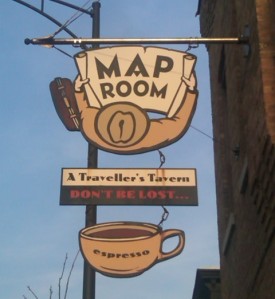 I found the time for beer touring during my last trip to Chicago in April. I hit three places that I would call “must see” for any beer enthusiast: Piece, the Map Room, and Goose Island.

As I wrote in my last post, I’ve enjoyed the beer and pizza at Piece on many occasions. But I had never been to the Map Room, a beer bar that’s been on my beer to-do list for a long time. I arrived in the late afternoon to a crowded bar but plenty of open tables. I loved the free pretzel rods at every table and the maps decorating the walls. On one wall there were bookcases full of stacks of old National Geographics. There’s nothing contrived here — the Map Room is just a well-worn neighborhood beer bar with an awesome beer menu.

The Map Room was a warm-up stop before dinner, so I only had time for two pints, though I could have stayed all night. I was excited to see Three Floyds Alpha King on the menu. Three Floyds Brewing Company is a small artisinal craft brewery located in Munster, Indiana, and Alpha King, a big American Pale Ale, is its flagship brew. My second beer was Lagunitas Chicago-Style Fusion Ale. According to the Chicago Tribune, this special limited-edition draft beer was created to celebrate the Craft Brewers Conference held in Chicago in April. Lagunitas Brewing Company, a Petaluma, California, craft brewery founded by a former Chicagoan, used Midwest-sourced ingredients to create a “Chicago-style pale ale.”

It was tough to leave the beer selection of the Map Room, but they don’t serve food (aside from the pretzel rods), and it was time for dinner. Next stop: the Goose Island Clybourn brewpub.

The beer menu at Goose Island was extensive and well-organized. There were 28 Goose Island brews on the menu, and they were listed under the following categories: refreshing, session, malty, hoppy, Belgian-style, and new world. Four-beer sampler racks provided the chance for a deep dive into the menu. I sampled the:

Needless to say, I had some interesting beers at Goose Island. I’ve had beer served with a slice of lemon and a slice of orange, but never a slice of bacon — the Maple Bacon Stout was awesome! I also enjoyed the Belgians and the IPAs. The food and service at Goose Island are great too!

With Piece, the Map Room, and Goose Island, there is no shortage of worthy beer destinations in Chicago.