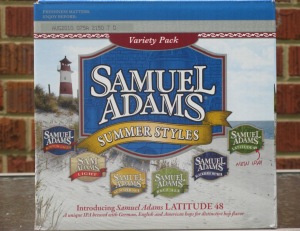 I was anxious to get my hands on the Sam Adams Summer Styles mixed 12-pack this year. Now, I’m always excited when I see the Sam summer 12-pack in the beer cooler because it tells me that the weather is warming and the summer beer drinking season has arrived.  But this year, I was especially eager to find the mix pack because I had heard that the Boston Beer Company (Boston, Massachusetts) was debuting a new IPA, available only in the summer 12-pack.

Samuel Adams Latitude 48 is the latest addition to the Sam Adams line-up — an IPA introduced in the 2010 summer variety 12-pack.  According to the label, “This is an ale brewed with a carefully selected blend of hops from top German, English and American growing regions, all located close to the 48th Latitude within the ‘hop belt’ of the Northern Hemisphere. The intense hop character is balanced by a slight sweetness and full body from the malt blend.”

I like Latitude 48 better than the retired Sam Adams IPA, but I was hoping for a brew with a more aggressive hop profile. I’ll need to try Latitude 48 a few more times before coming to any further definitive conclusions.

I’ll definitely pick up several more of these mixed 12 packs over the summer — this is a perfect mixed pack for camping trips!  I bought the 12-pack at Total Wine and More in McLean, Virginia and enjoyed it over the weekend of May 15-16, 2010.