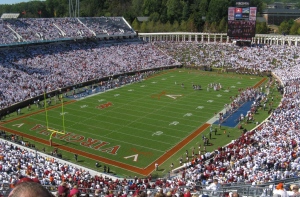 We drove to Charlottesville, Virginia last Saturday (October 2) for the Florida State vs. Virginia football game. UVA is a great place to watch a college football game, especially when your team (FSU) jumps out to a 27-0 lead at halftime and cruises to a 34-14 victory. Go Noles!

After the game, we headed for home and drove through Fredericksburg just in time for dinner. Earlier in the week, I did a little research and learned that Fredericksburg has a great beer scene, but I was looking for a recommendation, so I sent an e-mail to the DC-Beer e-mail list:

I’ll be driving through Fredericksburg, Virginia on Saturday and plan to stop somewhere for dinner. I’ll have the family with me – wife and twins (age 8). I’ve never been to Fredericksburg but I’ve been looking at three options:
— The Pub (Battlefield Brewing)
— Capital Ale House
— Lee’s Retreat Brewpub (Blue and Gray Brewing Company)

Any recommendations from the group? Thanks in advance.

I only got one reply, but it was all I needed. Lyle C. Brown, Head Brewer at Battlefield wrote me with an unbiased rundown of the Fredericksburg options, including a couple I hadn’t considered. He described The Pub as having standard American pub grub, which happens to be my favorite kind of food. When he mentioned that burgers are on special on Saturdays, I was sold. It didn’t hurt that there were five house brews on the beer menu! 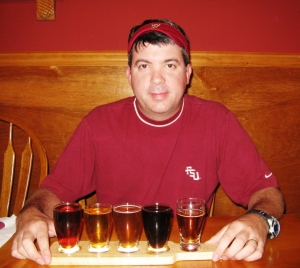 The Pub is in Chancellor Center, a shopping plaza on Route 3 West not far from I95. We had caravanned to the football game with my sister’s family and we pulled in with an eight-top, including four kids. My brother-in-law is a home brewer so it wasn’t too hard to talk them into stopping at The Pub for dinner.

Everyone loved the place! The Pub had great service and an awesome menu offering any kind of pub grub you can imagine — fried pickles, anyone? The burgers were top-notch (I had the Bacon BBQ burger). What more could you want? Oh yeah, the beer!

Three of us ordered the sampler rack, which came with:

Everyone had a different favorite beer, as they were solid across the board. I wished we could have stayed longer and didn’t have another hour on the road ahead of us. And I should have brought a growler! Oh well, we’ll have to go back. I’d like to take a day trip to Fredericksburg to tour the battlefields and sample the brews.