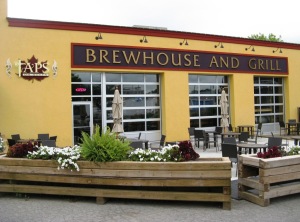 Taps on Queen Brewhouse and Grill

Our trip to Canada started on Thursday, September 9 when we left Kensington, MD at 6:00 a.m. for the 8-hour drive to Niagara Falls, Ontario. I’ve been to Canada many times, but this was the first family trip north of the border and we were all excited to see Niagara Falls and Toronto. And I was excited to explore Canadian beer!

We drove over the Rainbow Bridge and crossed the U.S.-Canada border at about 2:00 p.m. After checking into the Hilton Niagara Falls and admiring the view of the Falls from our room, we we walked down to see the Falls up close. Our ride on the Maid of the Mist was incredible! (See our pics from Niagara Falls below.)

Time for dinner – and a beer! There were a lot of options for dinner, including two brew pubs, and based on a local’s recommendation, I picked Taps on Queen Brewhouse and Grill. It was a couple of miles from the hotel, but it was nice to get out of the tourist area and off the beaten path.

The place was almost empty when we arrived, but it didn’t take long for the locals to come in and liven things up. The brewery restaurant had an interesting configuration – a large open room with the brewery tanks right in the middle, separating the bar from the dining room and kitchen. Service was attentive and friendly, typically Canadian. We were a bit disappointed in the beer selection as the two beers my wife and I ordered were both not available. My wife wanted the Wit, and I really wanted to try the Chuck Noris Roundhouse IPA. The beer description on the Taps web site says that “Chuck Noris IPA is the reason that Waldo is hiding…Prepare to be round-housed in the taste buds.” Man, that’s my kind of beer!

Oh well…I tried the four beers on tap: Charleston Lager, Premium Lager, Red Cream Ale, and ESB. The beers were solid, if not inspiring. I enjoyed the Red Cream Ale the most.

I wouldn’t hesitate to visit Taps on Queen again, for its solid beer, fresh food, friendly service,  and local vibe. After dinner, I stopped at a LCBO and picked up a six pack of the well-balanced Creemore Springs Premium Lager for the hotel room as we continued to be amazed by our view of the Falls.

Taps on Queen Brewhouse and Grill

View of US Falls from Hotel Room

Maid of the Mist Dock and the Falls

Heading to the Falls on the Maid of the Mist

US Falls from Maid of the Mist

Canadian Falls from Maid of the Mist

After a Ride on the Maid of the Mist

View of Niagara Falls (US side)

View of Niagara Falls (Canadian side)

With the Family at Niagara Falls

Watching the Maid of the Mist Brave the Falls