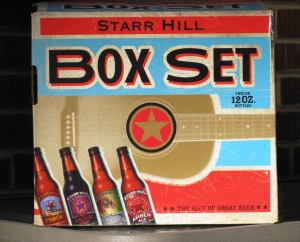 Wow. It’s been a while since we last heard from the Boa Beer Blog. And it hasn’t been from a shortage of beers, let me tell you.

Before we get too far into the winter beer season, I want to highlight one of my favorite fest beers of the fall season – Festie, brewed by Starr Hill Brewing Company (Charlottesville, VA)

Festie was included in the fall 2010 Starr Hill Box Set, which I picked up at Magruder’s in October. The box set included:

The Starr Hill Box Set offered an excellent mix of beers, from the sessionable Amber and Festie, to the solid IPA, rounded out by the special Stout. As I reminisce, I wish the Box Set was still on the shelves. Not to worry, I saw a new Starr Hill mix pack in the store a few days ago, and it features The Gift, Starr Hill’s holiday offering.