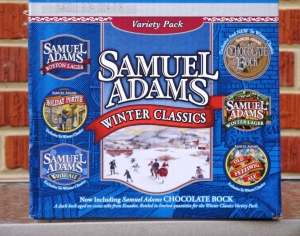 My go-to winter 12-packs have been Sam Adams Winter Classics and Harpoon Wintry Mix – I’ve gone through a few cases of each during this winter beer-drinking season. So one cold Sunday in December, while watching football at my backroom beer bar, I decided to hold a 12-pack taste-off.

Both 12-packs have two bottles of six different beers, so I matched Sam vs. Harpoon beers against each other in a six-on-six battle. Joining me in the taste-off of six-ounce samples was my beer-drinking companion, Beth. Here are the results of our Sam Adams Winter Classics vs Harpoon Wintry Mix taste-off.

1.  Sam Adams Chocolate Bock vs. Harpoon Chocolate Stout
Although the styles are not an exact match, the Chocolate in these brews made them worthy opponents. We liked the velvety mouthfeel and smooth flavor of the Bock more than the rich and bitter Stout.
Round 1 goes to Sam.

2.  Sam Adams White Ale vs. Harpoon’s UFO Hefeweizen
We both love refreshing White Ales and these two Whites were hard to tell apart. Both were excellent, and I’m calling this one a draw.

3.  Sam Adams Boston Lager vs. Harpoon IPA
Again, the styles are not an exact match, but these two brews are the flagship beers of their brand, so this was a great match-up. As much as I love a regular ol’ Sam Adams, I give the nod to Harpoon IPA because IPA is my favorite style, and this is a great interpretation of the style.
Round 3 goes to Harpoon, and were an even 1-1-1 heading into the second half of the 12-pack.

4.  Sam Adams Old Fezziwig vs. Harpoon Winter Warmer
This battle of holiday spice beers goes to Old Fezziwig, the standard-bearer for Christmas beers, IMHO.  Old Fezzy has a full body, and rich, deep flavors including toffee, caramel, chocolate, cinnamon, ginger, and orange peel.
Round 4 goes to Sam, for a 2-1-1 lead.

5.  Sam Adams Holiday Porter vs. Harpoon Munich Dark
OK, this isn’t a fair match-up. Munich Dark is a smooth, sessionable beer, but the robust and roasty Holiday Porter dominates.
Round 5 goes to Sam, surging ahead to a 3-1-1 lead.

6.  Sam Adams Winter Lager vs. Harpoon Belgian Pale Ale
I admire Harpoon for brewing a Belgian Pale Ale – I love Belgian styles and this fruity Belgian-American hybrid is an interesting character. But lining up against a winter beer legend, the Harpoon brew is no match for Sam’s Winter Lager, which may be the perfect winter beer with its combination of depth of flavor and smooth drinkability.
Sam Adams wins another round. After 6 beers, its Sam 4 – Harpoon 1, with 1 draw.