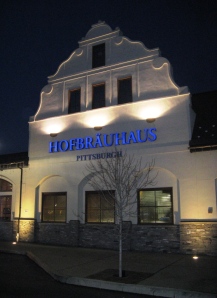 It was New Year’s Eve, and we were in Pittsburgh for the 2011 NHL Winter Classic – Capitals v. Penguins, scheduled to be played outdoors at Heinz Field at 1:00 p.m. on New Year’s Day. After settling into our hotel, we made plans to go out for dinner. Although we weren’t planning to stay out long enough to ring in the New Year, we wanted to go somewhere fun and have a memorable night.

We picked Hofbräuhaus Pittsburgh, and I don’t think we could have picked a better spot. Why? Well, first of all, Beth had just been to Germany, where she visited the original Hofbräuhaus in Munich and fell in love with the place. Second, is there a better atmosphere than a traditional German Bier Hall? And finally, of course, there’s the beer!

Hofbräuhaus Pittsburgh is modeled after the original 400+ year-old Hofbräuhaus in Munich. The excellent German food, live music in the Bier Hall, and German brew make this place as close to Germany as I’ve ever been (the Frankfurt airport notwithstanding).

I ordered a liter of the Hofbräu Hefe Weizen, and it was awesome. I also tried the Hofbräu Dunkel, a dark and delicious lager. The food was great too – I loved the hot German soft pretzels with bier cheese and my Weiner Schnitzel. 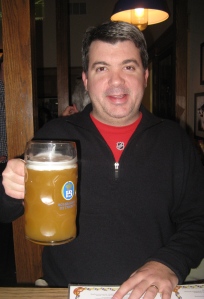 P.S. I liked Hofbräuhaus so much that I bought a six-pack of the Hefe Weizen when I saw it at Magruder’s last week. Don’t let the green bottles scare you away, it’s a good Hef. But beware – the bottles are only 11.2 ounces.

Up Next: Waiting out a rain delay by going to church.