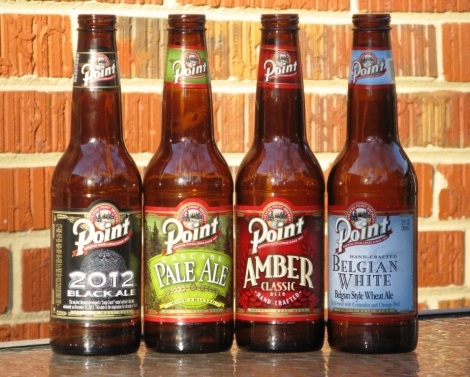 The beers from Stevens Point Brewery caught my eye as I walked down the beer aisle of Total Wine and More in McLean, Virginia. I wasn’t familiar with the brewery and decided to give them a try.

I love Total Wine because they sell singles. Since I’d never tried Point beers, I wasn’t ready to commit to a six-pack. So I got one bottle each of the four styles that were available:

These beers were all solid, and I would have no hesitation picking up a six-pack or more. The Amber Classic is sold in the can, and I’ll be looking for a 12-pack of this session beer the next time I am in Total Wine.

My favorite of the four was the 2012 Black Ale. Check out the story behind the name of this beer:  Thousands of years ago the ancient Mayans of Central America developed a “Long-Count” round calendar that ends ominously on December 21, 2012.  Some predict this symbolizes the end of time as we know it.  Inspired by this mystery, we offer Point 2012 Black Ale to help contemplate this ‘end of time’ or perhaps a ‘new beginning.’  Dark rich roasty and complex, Point 2012 Black Ale is hand-crafted with Pale, Munich, and Roasted Malts with Cluster, Saaz, and Cascade hops for the robust flavor and finish.  Enjoy — while there’s still time.