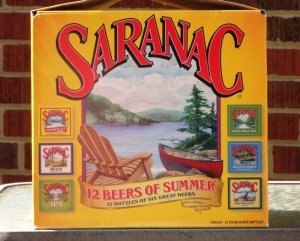 It is late August and I already see a lot of Oktoberfests and pumpkin brews in the beer store, but I’m not ready for them yet. I’m still sampling refreshing summer beers, such as the Saranac 12 Beers of Summer 2011.

The Matt Brewing Company in Utica, New York brews the Saranac line of beers. I hope I can find another case of this before its replaced on the store shelves with Saranac’s fall 12-pack!