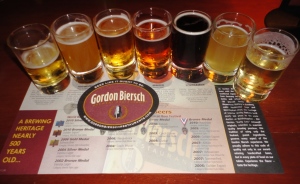 Occasion: Hurricane Irene! It all started on Saturday, August 27 as we celebrated Beth’s birthday with a fun lunch at Freddy’s Lobster + Clams in Bethesda. Freddy’s has a great beer selection and we enjoyed Allagash and Long Trail brews with our New England-style seafood. By the time we left Freddy’s, it was already raining and gusting from the first outer bands of Hurricane Irene, which was slowly making its way up the east coast. We got home and settled in for a long afternoon and evening in the Boa Beer Bar watching the Weather Channel, and we had some special suds for the occasion (more about that in a later blog post).

Anyway, the fun came to an end around midnight when we lost power. We knew we would lose power at some point during the hurricane — it was just a matter of when and for how long.

We were still without power on Sunday evening so we decided to go out to dinner to one of our favorite brewery restaurants — Gordon Biersch in the Town Square in Rockville, Maryland.  It’s nearby, and has convenient parking, a friendly atmosphere, great food, and solid German beers.

Beers Sampled: I ordered the sampler, so I could make an informed decision on which beer to take home in my growler. The sampler came with 7 beers:

Best Beer: Hefeweizen — Gordon Biersch makes a solid Hef and we decided to take home a growler full for a dark evening without power at home.

I was most impressed with: The Gose, my first taste of this beer style. Greg Kitsock’s beer column in the August 23 edition of the Washington Post raved about the Gose.  And Bill Ridgely, a homebrewer, beer judge, and active member of the DC-area beer community, posted these comments about the Gose on the DC beer e-mail list (and was kind enough to allow me to share them on my blog):

“I’d like to put in a plug for the latest seasonal release from the Gordon Biersch Rockville location. Brewers Kevin Blodger and Christian Layke just tapped their version of Gose, the tart wheat beer style originating from Leipzig in the eastern part of Germany. While this style was virtually lost for many years while Leipzig languished behind the iron curtain, it’s making a comeback, and several American interpretations have been brought forth over the last year or so. Kevin and Christian did an excellent job on their version. Brewed with a significant portion of acidulated malt to bring out the lactic tartness, their Gose features the traditional flavoring elements of coriander and a small amount of salt. The resulting beer has a wonderful lemony tartness and summer drinkability from the low (4.4%) ABV. If you are a fan of both low alcohol session beers as well as sour beers, you owe it to yourself to try this.  For those new to the style, there’s a very good description here.”

Epilogue: Pepco restored out power at around 8:00 p.m. on Monday, August 29, nearly two full days after we lost it during the worst of the storm.