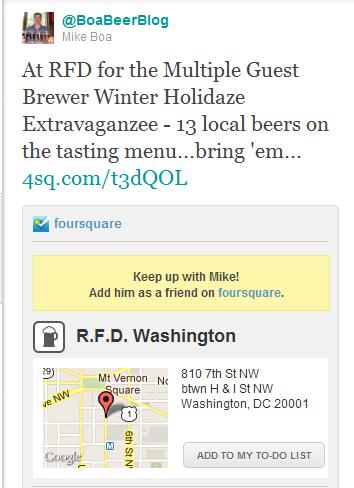 The DC beer scene has exploded to the point that this tasting is held over two separate nights, with a different line-up of local beers offered each night. I attended the December 14 tasting with my brother-in-law Rich, who is a home brewer.

We had been to a few of these beer tastings in the past, back when they were held at the Brickskeller. With the Brickskeller sold to new owners, the festivities are now held in the back bar at RFD, and I have to say that I liked the new venue a lot better than the venerable Brick. Superior service, clean bathrooms, and closer to the Metro are just a few reasons why RFD is a better spot than the Brickskeller. The servers did a great job getting the beers out to the packed house – there was no waiting, which kept the tasting moving along at a great pace. This was absolutely necessary, since there were 14 beers on the menu.

We arrived around 6:00 and grabbed a cocktail table along the back wall with a nice view of the stage. We knew the main event would not start for at least an hour and a half, so we warmed up with some brews from RFD’s long draft menu and took advantage of the sample-size pours. Pre-show, I tried the:

Our server was fast and helpful, and the food was classic bar fare. We started with a basket of soft pretzels and I added to my base with an order of sliders, which you could mix and match between cheeseburgers and buffalo chicken.

The anticipation was building as DC beer icon Dave Alexander announced the beer line-up.  There were 13 beers on the pre-printed menu, but BONUS, we had a write-in — a 14th beer was added to the line-up. The show finally got started with longtime Brickskeller beer-tasting emcee Bob Tupper shushing the crowd. 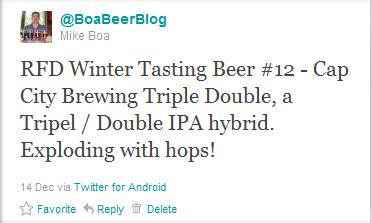 I tweeted each beer with comments as they were served, and I won’t repeat all those comments here. But here is the line-up:

As each beer was served, the brewers took the stage to talk about their creations. Their comments and insights about the beers really added a lot to the beer-tasting experience.

What a line-up! Even better: when the formal tasting ended, they poured free samples at the bar of any beer on the menu. I went back for the citrusy hop monster known as Triple/Double from Cap City. This unique brew is worth seeking out.

The best part of the tasting is knowing that all of these beers are being brewed right here around DC. I now have a New Year’s resolution for 2012: get out and visit these breweries and brewpubs in support of the local beer scene!