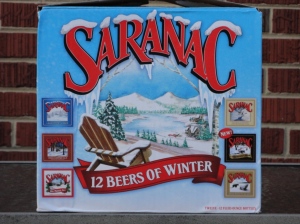 This winter, Sam Adams is battling against a new challenger: the Saranac 12 Beers of Winter brewed by Matt Brewing Company in Utica, New York.  I held the 12-pack taste-off in my backroom beer bar during a cold Saturday in late December.

Both 12-packs have two bottles of six different beers, so I matched Sam vs. Saranac beers against each other in a six-on-six battle. Joining me in the taste-off of six-ounce samples was my beer-drinking companion, Beth. Here are the results of the 2011 Winter 12-Pack Challenge.

2.  Sam Adams Winter Lager vs. Saranac Lake Effect Lager
The subtle spicing of the Winter Lager gives it the edge over Saranac’s excellent Lager, which actually tastes remarkably similar to a Sam brew with its German Hallertau hops. It’s Sam again, for a 2-0 lead.

4.  Sam Adams Holiday Porter vs. Saranac India Style Copper Ale
Even though these two beers are different styles, this was a good match-up. I preferred the roasty Porter to the flowery Copper Ale. Sam clinches the win, up 4-0 with 2 beers to go.

5.  Sam Adams Chocolate Bock vs. Saranac Chocolate Lager
The Bock was more chocolately than the Lager, so it gets the edge in this match-up of chocolate brews. With Sam up 5-0, only one question remains: will Sam pitch a shut-out?

6.  Sam Adams Black and Brew vs. Saranac Vanilla Stout
Sam’s Coffee Stout is dark and rich, and just a little over-bearing. I preferred the sweet and smooth Vanilla Stout from Saranac, who finally gets on the scoreboard.