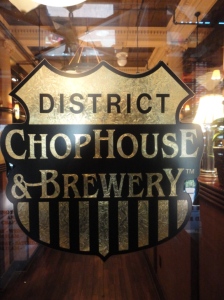 Last summer, I wrote a 7-part series about my summer 2011 tour of Maryland brewpubs. In that same spirit, I offer my Winter 2011-12 DC Brewpub Tour, another multi-part series featuring even more local places to get great beer. I hope these posts encourage you to support the awesome DC-area brewing community and visit more of our local breweries and brewpubs.

Occasion: A visit to the International Spy Museum in downtown DC. The Spy Museum has been on my DC-area bucket list since it opened in 2002. Almost 10 years later, I can finally check it off the list. Why the wait? The main reason is that the Spy Museum charges an admission fee. There are a lot of free museums in DC, so it took a Groupon for half-price admission to finally motivate me to visit. That, and beer of course. The Spy Museum is just a couple of blocks away from the District Chophouse!

A mild sunny Sunday in late February was a perfect day for a family trek into the city for brunch and a museum. First stop: brunch at the District Chophouse. We took the Metro to Chinatown and walked a couple of blocks down 7th Street to the restaurant.

Since our visit a few years ago, the District Chophouse has become one of my favorite brewery restaurants in the city. It feels fancy, with its white tablecloths and impeccable service, but at the same time, it’s totally approachable, especially the beer. While the beers aren’t brimming with creativity, they are solid sessionable brews. 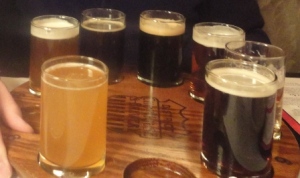 Beers Sampled: I ordered the seven-beer sampler (see picture of chalkboard below for descriptions and ABV):

Best Beer: The Velvet Ale was a a nitrogenated version of a Black IPA for a creamier head and velvety smoothness.

I was most impressed with: The brunch! I love a good Sunday brunch. And as a breakfast sandwich enthusiast, let me tell you, Valdez’s Breakfast Sandwich is the bomb — scrambled eggs and rosemary ham stuffed in a flaky croissant with melted white cheddar cheese. My wife loves the crab cakes and there is plenty for the kid’s too.

After brunch, we spent a couple of hours exploring the Spy Museum, and I have to confess to being a little disappointed. It was a fun way to spend a couple of hours with the family, but the museum offered very few inspiring or “wow” moments. Brunch and beer at the District Chophouse was the highlight of this day.