As the October air turns cooler and the Orioles magical season continues, I recall one of my favorite days of Summer 2012…

Located in Power Plant Live, this open and airy beer bar has 30 taps offering a range of Leinies and a solid guest draft line-up. The bar is housed in a glass pavilion with a retractable roof and large garage doors that open into a comfortable outdoor beer garden. We spent a summer afternoon at the beer garden enjoying beer samples and delicious pub grub before an O’s game in July.

I started with an all-Leinies flight:

The excellent Imperial IPA is part of Leinenkugel’s Big Eddy series of small-batch, strong, heavy brews – I didn’t know Leinenkugel’s had such beers in its repertoire, so this was a nice find. And the other three beers in my flight were perfect summer sippers.

Though I loved the Leinies, I built my next flight with guest drafts that I’ve never had before:

There was a lot to choose from: 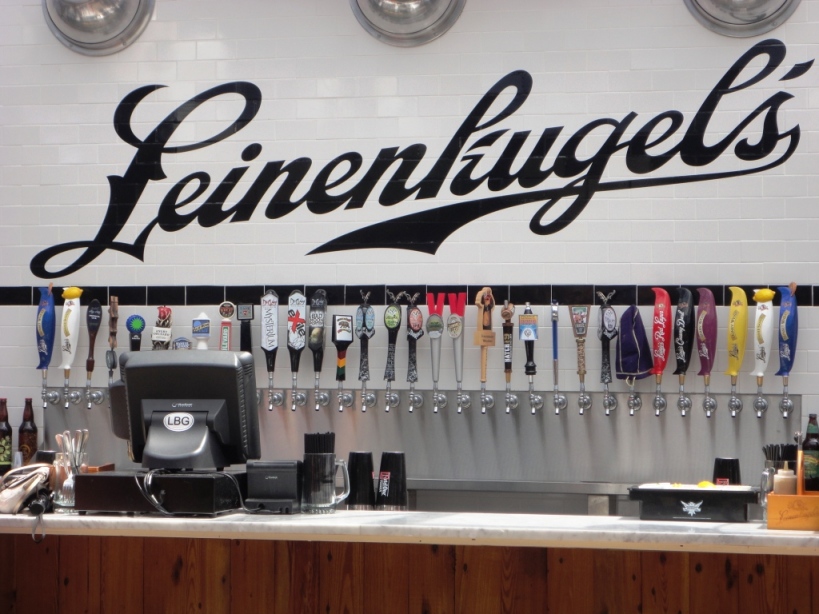 I wanted to go to Leinenkugel’s Beer Garden for the food as much as the beer. The food menu was full of tasty pub grub; we shared orders of Wisconsin Fried Cheese Bites, Crab Pretzels, Chicken Tenders, and Bratwurst Bites.

With its food menu, long beer list, friendly service, and beer garden vibe, Leinenkugel’s Beer Garden hit a grand slam! I decided to continue the Leinie’s theme with a Sunset Wheat from the Leinie’s beer stand at Oriole Park at Camden Yards, where we watched the Orioles beat the Tigers 8-6 on the day they unveiled the bronze sculpture of Jim Palmer. Another great day at the Yard — hope there are more to come this season!