After spending most of the day playing tourist in Chinatown and at Fisherman’s Wharf, we got off the beaten path and headed to The Mission, where I was looking for an authentic Mission burrito and local craft beer. 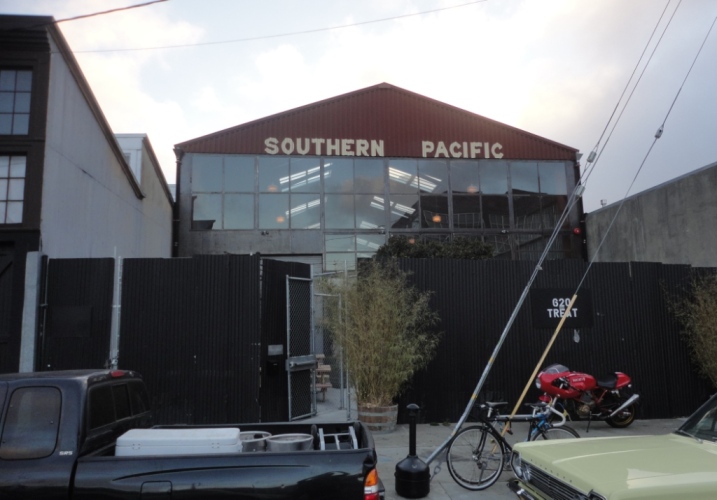 First stop: beer at Southern Pacific Brewing. This brewpub is in a 10,000 square foot warehouse located in what was once the Mission’s industrial area. The former machine shop has been renovated into a huge bar, restaurant and brewery. There is an outdoor patio, and an upper mezzanine with a second bar. It’s a really cool space. The pictures I took do it no justice, so I won’t even bother posting them – just check out the gallery on the SPB website to get a real feel for this unique space. It’s like no other brewpub I’ve ever been to.

We sat at a table upstairs, but you had to order at the bar. There were six house beers on tap, along with a few guest taps. I ordered a sampler tray of the house-brewed beers so I could try the full range of their offerings.

All of the beers were well-built, and I would have loved to stay for a pint or two of the Extra IPA, but Mission burritos were calling. I loved the space and atmosphere at Southern Pacific Brewing and would definitely go back if I got the chance.

We left the brewpub reluctantly but a few blocks later we were soon entranced by the sights and smells of Pancho Villa Taqueria. We ordered an insane amount of food — huge burritos filled with carne asada, with sides of chips, rice, and beans, and churros for dessert.

Beer and burritos: a great combination anywhere, but especially so in The Mission.