I was on a business trip to San Francisco. I was scheduled for all-day meetings for four straight days, and I knew it would be hard to find any free time to explore the local beer scene. So I went out early and spent the weekend before my meetings with my friends Martino and Lana, who live in the Sunset District. Talk about great hosts — during my weekend of free time, I was treated to three brewpubs, two tap houses, and a dive bar. But at some point, duty calls. And so on Monday I moved into my hotel in the Financial District and braced myself for the days ahead.

Somehow, some way, despite four days of day-long meetings and business dinners, I still found time for a few beers. Imagine that!

I was staying at the Hyatt Regency in the Embarcadero Center. The hotel is in the Guinness Book of World Records for the largest atrium lobby and is situated on the Embarcadero waterfront across from the historic Ferry Building. It’s a cool property in a great location. Even better: it’s just two blocks away from a brewpub/pizzeria. How convenient is that? 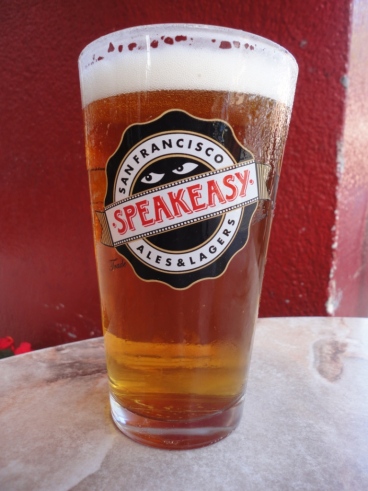 I only had time for one beer at Pizza Orgasmica and Brewing Co. and I went for the IPA, always my go-to house beer when I’m on the west coast. The Orgasmica IPA (7.2%) was a strong, classic “California style India Pale Ale using distinctly citrus flavored northwest hops and a lot of them.” The brew was the perfect complement to a slice of Orgasmica pie. I wish I had time to try the full range of Orgasmica brews.

During my stay in the Financial District, I had dinners at Pier 23, Il Fornaio, Waterfront Restaurant, and Tommy Toy’s. Along with the great food, I could always count on a local brew, and I enjoyed my share of the ubiquitous Anchor Steam. Another common San Francisco brew on tap was the excellent Big Daddy IPA from Speakeasy Ales & Lagers, which “tips the scales with a huge hop flavor” and weighs in at 6.5% ABV.

Finally, I had a bottle of 1500 American Pale Ale (5.5%) from Drake’s Brewing Company in San Leandro, California. I’d love to get more of this American Pale Ale. Brewed as batch number 1500, Drake’s “decided to brew a big hoppy beer, yet make it quaffable by keeping the alcohol level down.”

Next: Could I find time for one more brewpub before leaving San Francisco?