2013 is off to a great start. I just had a three-day weekend filled with family, friends, football, and beer!

I went home to watch the Ravens play in the AFC Championship. Home is Pocomoke, on Maryland’s Eastern Shore, where I grew up. Benjamin and I drove down on Sunday morning, and I planned the trip so that we would be ready for lunch as we passed through Salisbury. Why? Salisbury is the home of Evolution Brewing Company.

My friend John, of Blue Fin fame, met us for lunch at the EVO Public House. They opened at noon and we arrived at 12:15 ready to sample some brew. Not so fast, my friend. Restaurants can’t serve alcohol in Wicomico County until 12:30 p.m. on Sundays – a reminder we had crossed the Bay and were on the Shore.

The beer was worth the wait. I brought in two growlers, so I ordered the four-beer sampler rack to help with my growler decisions. I was planning to drink one growler during the Ravens game and take the second growler home to share with Beth. There were seven house beers and two guest beers on tap. My sampler rack included: 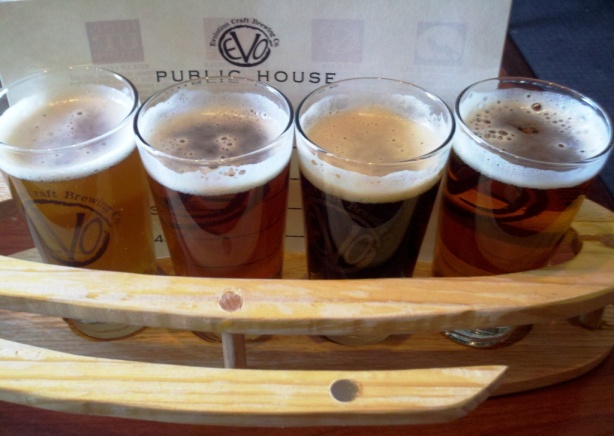 I also had a sampler-size glass of Lot #6 Double IPA, described as “Lot #3 on performance enhancing malt and hops.” At 9.3% ABV and 75 IBU, I knew this wasn’t a candidate for the growler – too strong for an NFL playoff session beer and too hoppy for my wife – but I couldn’t resist a sampler glass of this brew. Wish I had more time for a pint!

Time to roll on to Pocomoke. The server advised that I get my growlers filled in the Tasting Room, so after settling up for lunch, we walked next door to the production side of the brewery. We were attended to right away in the Tasting Room, and I left with a growler of the sessionable Primal Pale Ale for the Ravens game and a growler of Exile ESB to take home to Kensington.

The weekend just got better from there. I watched the Ravens beat the Patriots to go to the Super Bowl with my best friends, a year after a crushing loss. Sweet revenge!

And sweet beer! I love that there are craft brewers on the Eastern Shore of Maryland – possibly the last bastion in the nation for mass-produced light lagers. Sure, I downed a couple of Natural Lights with my high school friends during the Ravens victory. But I also savored a growler of local craft brew from Evolution Brewing Company. And as the football game ended with the Ravens headed to the Super Bowl, I broke out bottles of Sierra Nevada Celebration Ale to mark the occasion.

One response to “Evolution Brewing Company”