The BoaBeerBlog has been offline due to a trip to Vancouver. More on that trip later. I have to finish the beer travelogue of my trip to Ireland…here’s the final chapter:

SATURDAY, APRIL 27 — After four fabulous days in Ireland, the trip got better on Day 5! After a quick breakfast, we took the tram to the Guinness Storehouse – the mecca for beer drinkers who visit Ireland.

From the Visitor’s Guide: Guinness Storehouse was a fermentation plant from 1904 to 1988 and is now a seven story visitor experience dedicated to the history and making of this world famous beer. The building is designed in the shape of a giant pint of Guinness, that if full, would hold 14.3 million pints!

OK, so it’s not exactly an Irish pub, but what an amazing experience! Instead of trying to describe the brewery tour with words, I’ll just share some pics:

We enjoyed learning about the Guinness brewing process and as a marketing professional, I was fascinated with the exhibit on Guinness advertising. We also spent way too much time (and money) in the expansive brewery gift shop. But the highlight of the visit was The Guinness Academy, where you learn how to pour a perfect pint of Guinness. It was a fun lesson, especially since we got to enjoy the fruits of our labor. I am now certified to pour a perfect pint of Guinness!

Pouring the Perfect Pint at the Guinness Academy

A tour of the Guinness Storehouse usually culminates in a visit to the Gravity Bar on the seventh level, where you can enjoy pints of Guinness while taking in the 360° view of Dublin City and beyond. We skipped the Gravity Bar because we would be back later that night – the Farewell Dinner of Beth’s company meeting was being held at the Gravity Bar!

After visiting the Guinness Storehouse, Beth had a meeting and I did some last-minute souvenir shopping and beer tasting. I found a pub called Against the Grain, which had a great selection of Irish brews. I had two half-pints of new brews, but I didn’t jot down the names because I was distracted by a couple of intoxicated local yokels who were engrossed with the American in the pub. Who knew I was so interesting?

By this time, it was late afternoon and next on our itinerary was the Dublin Musical Pub Crawl. As they described it:
What better way to spend an afternoon than enjoying two of the things Dublin is most famous for—music and pubs! Your guides for the afternoon will take you around the famous district of Temple Bar and share a pint at several pubs. During your visits, you will enjoy live Irish music.

Well, the pub crawl wasn’t exactly a crawl, unless you consider two pubs a pub crawl! That said, it was a lot of fun. Our musical hosts gave us a tour through Irish music that did not include your typical Irish drinking songs. We’ve all heard them enough anyway. Instead, the duo played some traditional Irish music at two different pubs: The Ha’penny Bridge Inn and The Stags Head. We had a private room with a dedicated bartender in both places. After the last song at The Stags Head, I went into the main bar and watched rugby with the locals – a memorable experience! 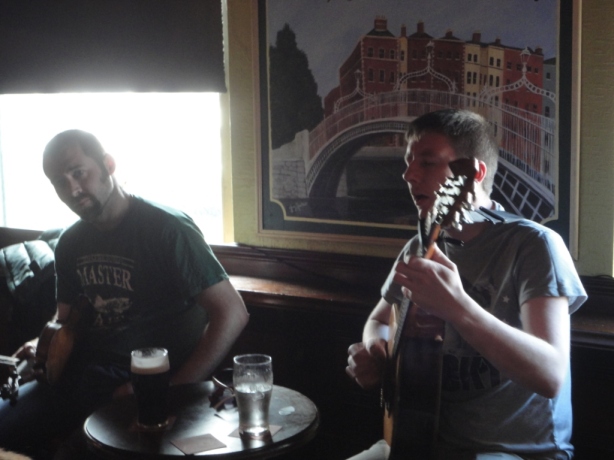 The Musical Duo of the Dublin Musical Pub Crawl

We went straight from the Pub Crawl back to the Guinness Storehouse for dinner. We spent some time hanging out in Arthur’s Bar (that would be Arthur Guinness, founder of the brewery), which was a cool re-creation of an Irish pub from the 70’s. Then it was time for dinner, where we enjoyed amazing views of Dublin City. My pic doesn’t do it justice.

View of Dublin City from the Gravity Bar At Guinness Storehouse

What a great way to end our trip to Ireland!