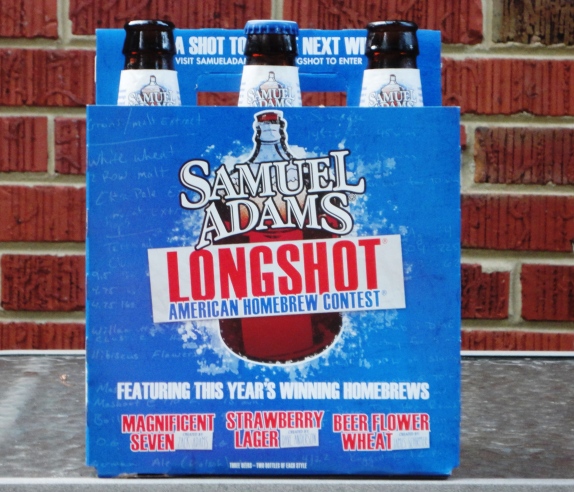 After a quiet couple of weeks from the Boa Beer Blog, I’m back for one more post in the month of June. Where is the summer going!

As I ease back into the blog, I’ll highlight a recent six-pack: the 2013 Samuel Adams LongShot brews. I found the six-pack at Elbe’s Beer & Wine, the family-owned business that has been proudly serving Montgomery County residents since 1951. Elbe’s is an institution, and one I had strangely managed to avoid in the 10+ years I’ve lived in Kensington, despite being only two miles away. I have to thank my craft beer-drinking buddy Monroe for finally getting me to Elbe’s. After going to Elbe’s with Monroe and finding a great selection of local craft beer, I’ve been back a few times since.

The Longshot American Homebrew Contest is yet another reason that I admire the Boston Beer Company. Every year, the brewery invites homebrewers to enter their innovative and creative brews in the contest.  Three winning brews are chosen from among the entries and the winning homebrewers have their unique brews made available nationwide in the Samuel Adams LongShot variety six-pack.

Since I bought two six packs and had four beers of each style, I had ample opportunity to fully explore each unique and delicious brew. I loved all of these beers and wish I could get my hands on more!