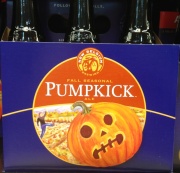 I tend to resist the transition to fall beers because it means summer is coming to an end and colder weather is on the way. I’m still in summer mode when I spot my first fall release of the year. This year I spotted New Belgium’s Pumpkick, a spiced ale brewed with pumpkin juice, at Harris Teeter on July 31. Pumpkin beer in July? No thank you!

But now it’s mid-September, and we’re enjoying beautiful sunny days and cool evenings. It’s a couple of weeks into football season, and I’m ready to make the switch to fall brew. As I do every year, I’m starting my exploration of this year’s fall seasonals with the Sam Adams Harvest Collection.

Hazel Brown, a delicious Nut Brown Ale, is the most interesting brew in the mixed 12-pack. This flavorful dark brown ale has a distinct hazelnut aroma and taste.

Ruby Mild is new to the Harvest Collection and is described as a smooth, sweet, malty brew with a hint of ruby color and delicate hop note. According to the Sam Adams website, Mild Ales rose to popularity in the 1800s as the refreshing brew of choice for English railway laborers. The term mild originally meant fresh beer as opposed to “stale” aged beer.  Today the name is more often interpreted as representing a “mildly hopped” beer.

This post marks the fifth year in the row that I’ve blogged about the Sam Adams Harvest Collection. I sampled the mixed 12-pack while watching football games over the weekend of September 14-15.