Continuing the beer travelogue of my 2014 Spring Break road trip through eastern Tennessee and western North Carolina — the heart of Appalachia.

Western North Carolina is blessed with an abundance of great beer. Asheville is amazing, of course, but there are a lot of other beer destinations that are not to be missed — like Waynesville, NC. Nestled in the Great Smoky Mountains, the town of Waynesville has two breweries and a downtown brewpub for its 10,000 residents.

After lunch at Tipping Point Brewery and Tavern in downtown Waynesville, we drove to the historical district known as Frog Level to find the brewery by the same name. 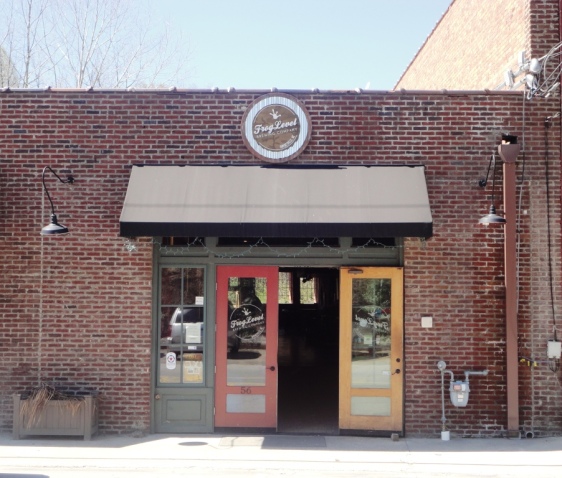 Frog Level Brewing Company is in a historic building between the railroad tracks and Richland Creek, and the long bar in the large open tasting room invited us to come in and sit a spell. Even better was the back patio, which was just steps away from the rushing creek and the perfect spot for a beer on a sunny afternoon.

There were six house beers on tap and I ordered a sample size of each:

Frog Level offered a solid line-up from the easy-drinking sessionable Lily’s Cream Boy, to the complex smoky Hopscotch Ale. My favorite was the hoppy Salamander Slam IPA, and I took a growler to-go of the Nutty Brunette. They were all good!

With Asheville in sight, I took a chance detouring to little Waynesville, but I am so glad I did!