After a long morning relaxing on Clearwater Beach, we trekked over to Dunedin Brewery for beer and pub grub.

I built my four-beer flight from the long list of seasonal brews, since I’ve had all the year-round house beers on several past visits (2013, 2011).

After my flight, I ordered a half-pint of Mix Tape #5 (12.3%), a strong stout with notes of black cherry and graham cracker:

I love Dunedin Brewery for the food as much as the amazing beer. The Fried Cheese Curds are the best!

7venth Sun Brewery is less than a mile from Dunedin Brewery, and I couldn’t pass up the chance to swing by for one more pint before calling it a day. 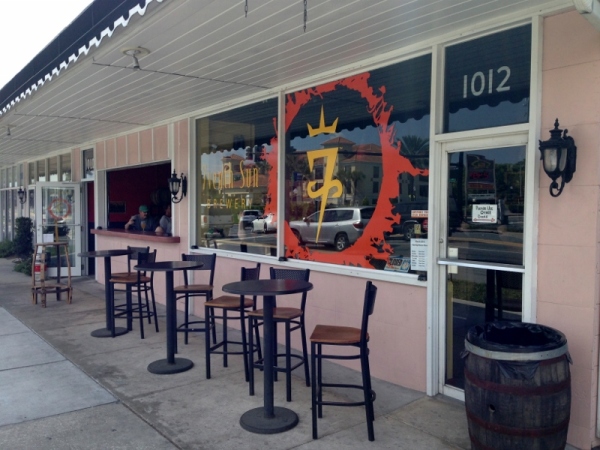 After perusing the large beer chalkboard in the small tasting room…

…I sampled the Graffiti Orange Creamsicle Wheat (5.9%) then had a pint of the Intergalactic Pale Ale (5.4%), a session IPA brewed with Galaxy hops.

After the beach, two breweries, and seven amazing local craft brews, I was settling into my Spring Break vacation.