BUFFALO, New York, January 2016 — I was in Niagara Falls for a convention and had an open afternoon, so I crossed the border into New York in search of some Buffalo wings and local beer. My first stop was the Anchor Bar, “home of the original chicken wing” where Buffalo wings were invented in 1964. I savored an order of traditional Buffalo wings and tried an order of the spicy Bar-B-Que wings too. To top it off, I had a Roast Beef on Weck sandwich, another Buffalo classic. Absolutely delicious!

After devouring the local cuisine, I was ready for some local brew, since the draft selection at Anchor Bar was limited. The bartender pointed me towards Flying Bison Brewing Company. Great call!

There were 12 beers on tap:

And I sampled 10 of them over two flights. 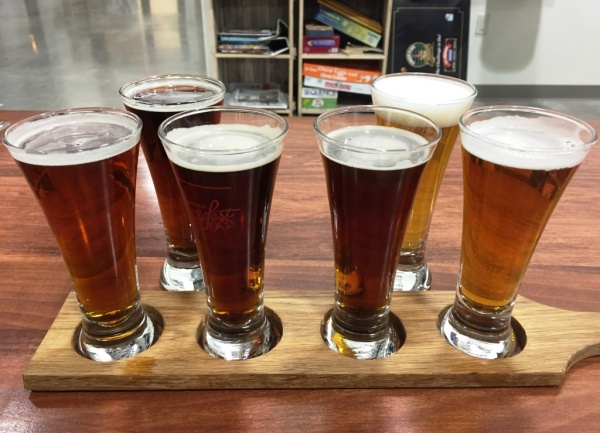 Favorite Beer: All of the beers were solid and it’s too hard to pick a favorite. I’m partial to hoppy beers, so I loved the Buffalo IPA, Black IPA, and Hoppy Hour Hero moe.saic IPA. But I also really enjoyed the 15th Anniversary Imperial Red Ale, Red’s Heaven. And the Blizzard Bock, MacBison Scotch Ale, and Bison Warmer. They were all good!

I was most impressed with: Besides the awesome beer, I was impressed with the huge, open tasting room and the super-friendly staff.

And oh by the way: The view of the sunset from the large tasting room windows was incredible!