Occasion: The grand opening of Virginia’s newest brewery, or as they called it, Extravaganzapalooza!

My co-worker is an investor in the Brew Republic and has been telling me about it since February 2015. I’ve been anticipating this brewery for so long that I wanted to be there for opening day.

I wanted to try them all, so I ordered a six beer flight:

Favorite Beer: Brew Republic has a solid line-up of house brews, and my favorite was the Virginia IPA. After my flight, I ordered a separate pint, but wait, what?  Brew Republic doesn’t serve pints, just 12 ounce pours at a pint price ($6-$7 per beer). A pub where you can’t get a pint? Hmmm…

I was most impressed with: The space. Brew Republic is located in Potomac Town Center, a swanky spot for a brewery! But you forget about the stylish town center anchored by an Apple store when you walk in Brew Republic. With the wide, open layout, exposed high ceilings, and brewery equipment on display, you could be sipping fresh craft brew in a light industrial warehouse district – and that’s a good thing! 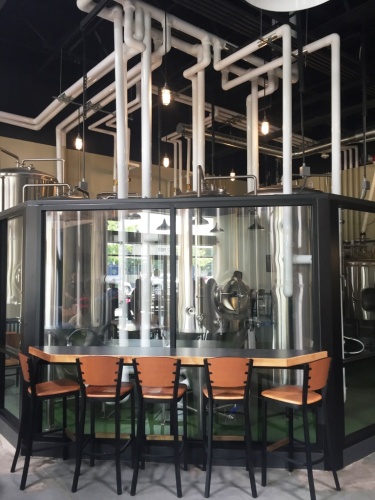 I was also impressed with the opening day crowds – great sign for the new nation of beer that is the Brew Republic.