As I was leaving the first stop on my Columbus brewpub tour, Hoof Hearted Brewery and Kitchen, I asked my server where I should head next. Lucky for me, there was another brewpub just down the street! Seventh Son Brewery was only four blocks away and beckoned with its tall bright sign against the dark night sky…

As I browsed the beer chalkboard and the 11 beers on tap, I noticed something – this place offered the largest range of beers in terms of ABV of any brewery I’ve visited. At the top of the list was a Table Beer at 2.8%. At the bottom was an Imperial Stout at 13%. So more than a 10% difference between the lightest and strongest beer! Crazy! While there were a couple of lower ABV beers, Seventh Son definitely rewards those who like their brew strong, with two Barley Wines, an American Strong Ale, and a DIPA to go along with the Imperial Stout. Whoa! 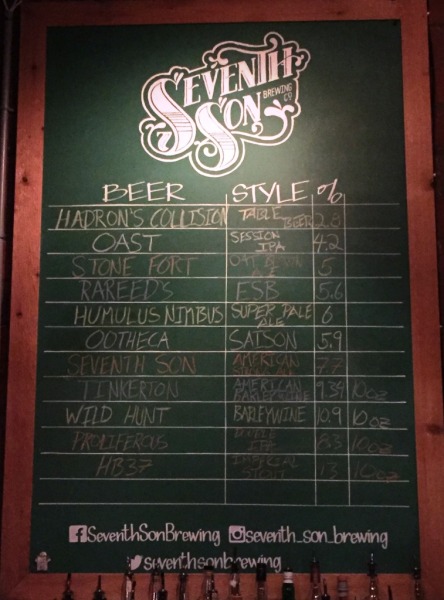 Seventh Son offered four-beer flights, and I limited myself to just one – the Hop Lovers Flight – since I just came from Hoof Hearted.

Favorite Beer: It’s so hard for to pick a favorite from a flight of four hoppy brews! The Strong Ale and DIPA were delicious, but if I had to choose, give me another pint of Humulus Nimbus. Or a tall boy can! I found a four-pack of this tasty brew at the beer store near my hotel and savored it the rest of my trip.

I was most impressed with: The cool vibe of the place. Whereas Hoof Hearted was shiny and new, Seventh Son was gritty and well-worn. And that was a good thing! Seventh Son was clearly popular with the locals, and its easy to see why. It’s just a cool place to be.