I have a new favorite mobile app: Brewery Map. This mapping app includes a road trip feature that displays all of the brewpubs and breweries along your route. That’s how I found Queen City Brewing in Staunton, Virgina.

We spent the weekend camping at Shenandoah Valley Campground. I used Brewery Map to plan our route from Kensington, Maryland  to Verona, Virginia and found that once we got out of the DC metro area, there were not any brewpubs along our route. From the DC beltway, we took I66 west to I81 south to Verona. But Queen City Brewing was just another 7 miles south in the nearby historic town of Staunton.

After a fabulous lunch at the Byers Street Bistro, we found Queen City Brewing, which is a microbrewery and brew-on-premises. It wasn’t crowded, with just one homebrewer watching his batch, so we basically had the place to ourselves. The guy on duty gave us an overview of the place and then with two growlers in hand, we sampled from among the 12 beers on draft to see what we wanted to take back to the campground.

We filled our growlers with the refreshing Raspberry Wheat and the strong Triple Belgian (9.0%), and then had a fun and relaxing evening at our campsite. 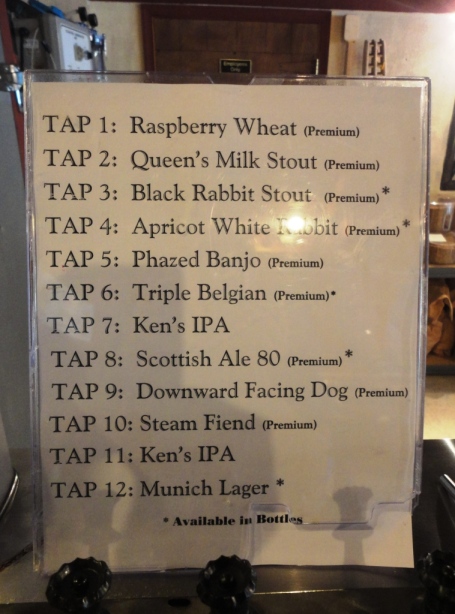 If we had been camping a little further south, we would have taken the time to explore the Brew Ridge Trail. But on this quick weekend trip, we only got as far as Staunton, which is known for being the birthplace of Woodrow Wilson, the 28th U.S. president, and the home of Mary Baldwin College, a women’s college.

Shenandoah Valley Campground was crowded but fun. The campground is “nestled within a 1 ½ mile horseshoe bend of Middle River” and we spent some time tubing on the river. The camping trip-brewery visit combo made for an awesome weekend get-away with the family.

One response to “Queen City Brewing”