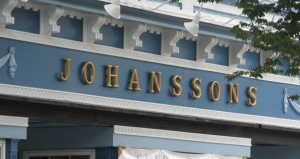 Johanssons offers a four-beer sampler, and since they had five house beers on tap, I ordered the sampler plus a pint:

My favorite beer was the IPA and I wish I had time for another pint.  I also liked the Recession Ale, which sells for only $2 a pint.  Beyond the house beers, they have a nice guest beer selection.  The food and service were excellent.

Johanssons is on Main Street in downtown Westminster, just a few blocks from the McDaniel College campus.  The restaurant is in an old building, which gives it a lot of character.  The English-style tavern area is very inviting.

This is the fifth year in a row that Benjamin, Emily, and I have gone to Ravens Training Camp, followed by lunch at Johanssons.  I love this family tradition!