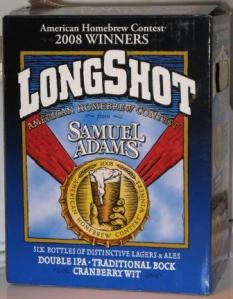 The Boston Beer Company, brewer of Sam Adams beers, holds an annual home brew competition and the winners get their beers packaged into the Samuel Adams Long Shot six pack.  I picked up a six pack of the Long Shot brews over the weekend and wish I had grabbed two.

The 2009 Long Shot six pack includes two bottles each of:

I’ll be looking for the next batch of Sam Adams home brews in winter 2010.