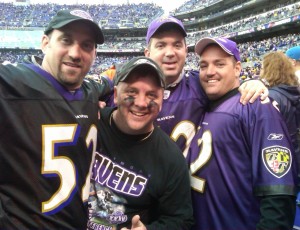 I went to the Ravens-Broncos game in Baltimore on Sunday, November 1  with some friends from the Eastern Shore. They brought coolers of beer for the tailgate, filled with Miller Lite, Bud Light, and Keystone Light.

Now I learned long ago that you can’t tailgate drinking the 6%-7% IPAs that I love so much.  But I won’t delve into the depths of the beer cooler for Keystone Light either.

My cooler had six packs of Sam Adams Light and Lighter from Hook and Ladder Brewing Company.  Sam Adams Light is 4% and Lighter is only 3.2% – perfect for tailgating, when you crack open your first beer at 10:00 a.m. for a 1:00 p.m. kick-off.  These are light, low alcohol beers with actual flavor!

Inside M&T Bank Stadium, I went with Coors Light, my favorite of the mass produced lagers.  There may have been some craft beer somewhere in the stadium, but I didn’t look for it, opting for the convenience of the beer man walking the aisles.  I’m headed back to the stadium on December 13 to see the Ravens play the Lions, and I’ll hunt for some craft beer at that game.

The Ravens crushed the Broncos 30-7, and Craig, Paul, Bobby, Petey, Ryan and I loved every minute of the Bronco beat-down.

2 responses to “Best Beers for Tailgating”