Day 1 of my weekend in San Francisco was highlighted by visits to two new brewpubs – Beach Chalet Brewery & Restaurant and Social Kitchen & Brewery.

I continued my exploration of the San Francisco beer scene on day 2 with visits to two tap houses while touring the city’s most well-known tourist destinations.

Our first stop on Sunday was Chinatown, and we couldn’t have asked for better tour guides. Our hosts, Martino and Lana, both speak Chinese and Lana’s grandparents owned a store in Chinatown for many years. They both know Chinatown well, and we got a behind the scenes tour, venturing well beyond where the typical tourists roam. My favorite stop was the Chinese fortune cookie factory, where I had cookies made with custom-printed fortunes and we tasted hot, freshly-baked fortune cookies (see pic in gallery below!).

Enough touring, time for a beer. After Chinatown, we went to Rogue Ales Public House, located in the heart of San Francisco’s fabled North Beach neighborhood, which is between Chinatown and Fisherman’s Wharf. I had been here before, and I loved it. No, they don’t serve local San Francisco beer (Rogue Brewery is headquartered in Newport, OR), but I love Rogue brew and the Public House is a friendly and inviting 40-tap beer bar. I’ll always try to find my way to the Public House on future trips to San Francisco. Just check out the beer menu:

The Rogue line-up is offered in four-beer samplers, and we sat at the bar long enough for me to work through two racks:

Thumbs up on the pub grub too. The Kobe Blue Balls appetizer was a plate of three Kobe beef meatballs stuffed with Rogue Creamery Oregon Bleu cheese – perfect with the rich, flavorful, and hoppy ales.

With more of the city to see, we left the Public House for a leisurely walk down to Fisherman’s Wharf. After playing tourist along the Wharf for a while, we settled in at Jack’s Cannery Bar. We actually just stumbled onto the place, drawn in by the promise of 85 beer taps. After jostling with the crowd of tourists around the Wharf, Jack’s was a welcome respite. There were only a few people at the bar, and the bartenders treated us to quick and friendly service. I enjoyed a few pints of beer I can’t find back home: 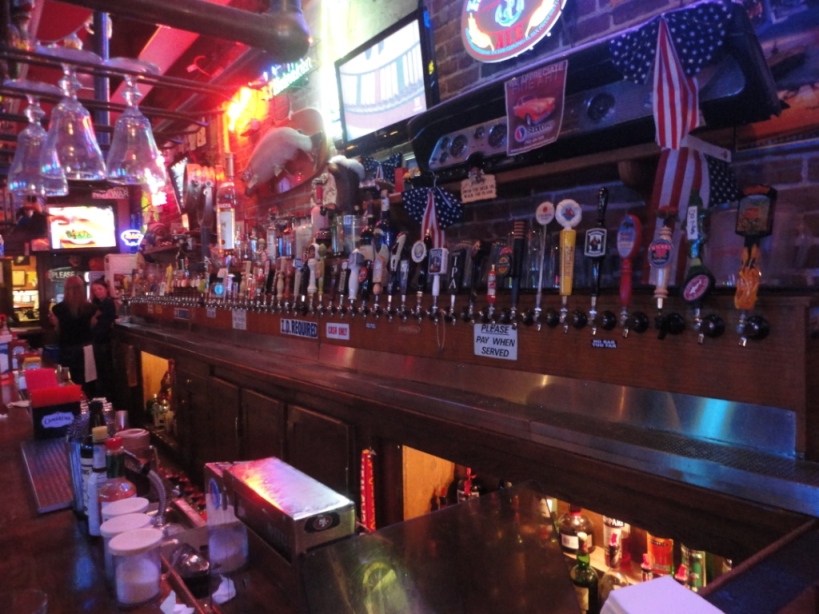 The Taps of Jack’s Cannery Bar

Jack’s had an awesome line-up of local brews and I could have stayed longer. But the countdown had begun – on Tuesday I would be immersed in meetings with precious little free time to explore one of my favorite beer cities. So we decided to leave Jack’s and press on.

Next stop: the Mission District for authentic Mission Burritos and local craft beer.