NIAGARA FALLS, Ontario, January 2016 — I’ll close out my Niagara Falls trip report with the excellent brews I sampled from the local beer store. I loved walking around the Falls and exploring the local area, especially my visit to Niagara Brewing Company. But I also spent plenty of time during breaks in the convention relaxing in my room , where I enjoyed Canadian brew and a beautiful view of the Falls.

The line-up of tall boy cans:

And the line-up of bombers:

This four-pack of bombers from Yukon Brewing Company was a gift from a Canadian friend.

Finally, in the Toronto airport while waiting for my flight home, I had a can of Pompous Ass, an English Pale Ale from Great Lakes Brewery . 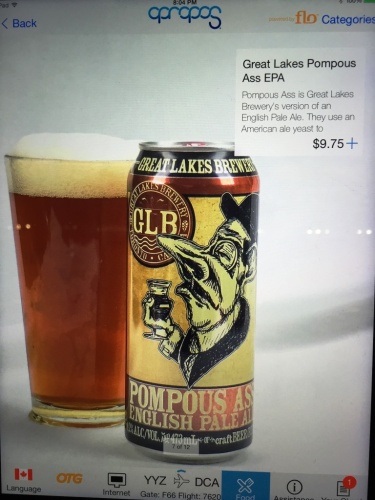